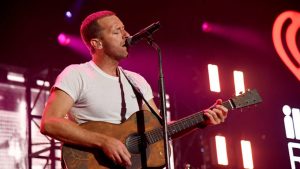 Chris Martin is the current lead singer and co-founder of the band Coldplay. He began his music career when he formed a band with Jonny Buckland, Guy Berryman, and Will Champion. Their band was originally known as Pectoralz, then Starfish, then they were finally given their current name by another band that simply didn’t want it anymore.

Their debut album was Parachutes which was released under Parlophone in the United Kingdom. Their first and most famous song was “Yellow” and since then, they’ve produced 8 albums.

Martin has also done some solo and collaboration work, particularly with Jay-Z in 2006 on his album Kingdom Come and with artists such as Kanye West, DJ Avicci, and the Chainsmokers.