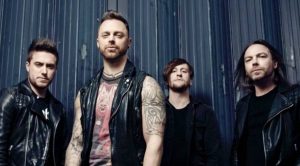 Bullet For My Valentine is a heavy metal band formed in Bridgend, Wales in 1998 by Matthew Tuck, Michael Paget, Nick Crancle, and Michael Thomas. They were all studying music at Bridgend College at the time and began their band’s career doing covers of Metallica and Nirvana songs. Better Off Alone, their first EP, was released in 1999 and it took 3 years before their second EP was released in 2002, You/Play with Me.

They first signed with Sony BMG on a deal to produce 5 albums. Their first album was released in 2005, but didn’t become certified gold until January 30th, 2009.

Waking The Demon (vocal, guitar, bass only) – Bullet For My Valentine