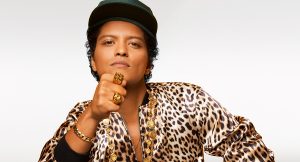 Bruno Mars, born Peter Gene Hernandez on October 8, 1985, began his musical career within a family that had many musicians in it, including his mother, father, and uncle. He performed with his family’s own band, The Love Notes, and was recognized in Hawaii for his Elvis Presley impersonations.

He signed a contract with Motown Records in 2004, but was dropped within a year. He didn’t release his first album, Doo-Wops & Hooligans, until 2010 under Atlantic and Elektra Records. The second single on the album, “Grenade”, attained number one on the US Hot 100 and did the same in Canada and the United Kingdom. It was his first hit single. The album itself was released on October 5, 2010.

Marry You (vocals only) – Bruno Mars