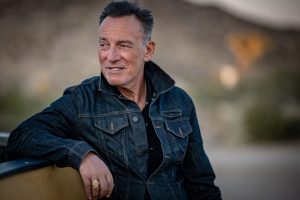 Bruce Springsteen began his career around age 15 playing at local clubs such as the Elks Lodge with a guitar he’d bought for only $18.95 in 1964 at a Western Auto Appliance Store. Later on that year, his mother used a loan to purchase him a Kent guitar for $60. From there he went onto being a member of a band the Castiles, where he became the lead guitarist and singer. He went through multiple bands, including the Bruce Springsteen Band between 1971 and 1972.

His first and only label was Columbia Records who he was signed with in 1972. His first album was Greetings from Asbury Park, N.J. Sales were slow, but it established him enough that a second album was produced The Wild, the Innocent & the E Street Shuffle. This album was also not a commercial success and he was so unhappy with the finished album “Born to Run” that he threw it into an alley. He threw another version out of his hotel window.  Upon release, it was his first commercial success.