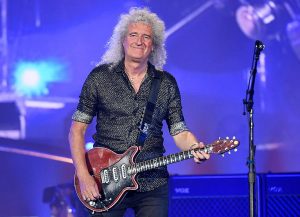 Brian May is the current lead guitarist of the rock band Queen. He was the co-founder of the band alongside Freddie Mercury and Roger Taylor, although the first band he performed in was his own band called Smile in 1968. The band included Roger Taylor, who ended up with Queen when they were formed in 1970.

May worked on some side projects and solo music between 1983 and 1999. He finished his first solo album called Back to the Light within a year of the death of Mercury.

Aside from his music career, he also has a PhD in astrophysics.

Killer (Brian May guitar only) – Queen