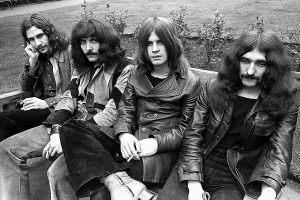 Black Sabbath was the English heavy metal band that began the career of vocalist Ozzy Osbourne in 1968 and it was formed by him, guitarist Tony Iommi, drummer Bill Ward, and bassist Geezer Butler.  Their first band name was actually The Polka Tulk Blues Band, was then changed to Polka Tulk, then changed to Earth. When they figured out that they were being mistaken for another group of the same name, they decided another name change was in order. When they saw the film Black Sabbath being shown across the street from where they were rehearsing, they wrote a song of the same name. They changed their band name to Black Sabbath as a result, because they wanted to be different from the rest of the music scene of the late 1960’s, which was full of hippie, “flower power” vibes.