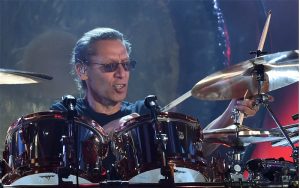 Alex Van Halen is the co-founder of Van Halen, one of the most famous rock bands of all time. He has been the drummer since the band was created in 1974 and since the band’s creation, only he and his younger brother, Eddie Van Halen, have stayed members.

Their first album as Van Halen was released in 1978.

“Brown sound” is a reference Alex came up with for the sound of his snare drum, not the sound of Eddie Van Halen’s guitar.