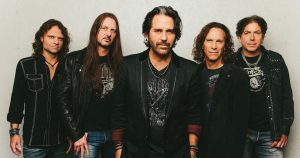 Winger is a glam metal band with a progressive touch. They started to see success in the late 80s and early 90s, only to fall in flames to the advent of the grunge takeover. They never had a chance to get warmed up and season.

Wingers first hit single was “Headed for a Heartbreak”, topping the charts by early 1989, just as grunge was starting to get some airtime in the main stream.

They did produce two more albums before calling it quits, the first of two times. Their second album “In the Heart of the Young” done as well as their first self titled album, but their third didn’t do as well.