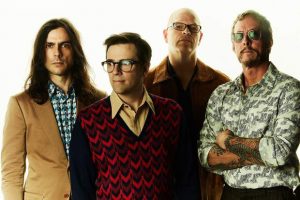 Weezer is an American rock band that was formed by Rivers Cuomo, Patrick Wilson, and Matt Sharp. The band went through several incarnations and their initial name was Fuzz, but after the bass player, Scottie Chapman, quit, they renamed themselves Sixty Wrong Sausages. It wasn’t to last, however, and the group disbanded soon afterward.

Their first gig as Weezer came in 1992 when they closed out a show for Dogstar, which was Keanu Reeve’s band at the time. Matt Sharp was the band’s manager at the time and was given a task by Cuomo: get us a record deal within a year before he had to accept a scholarship to UC-Berkeley.

As a result, they recorded a demo and when it was heard by Todd Sullivan, they were signed by Geffen Records in 1993.

Their first album was titled as their name, Weezer, but is today known as the “Blue Album”. This would become a theme for their albums, as they’ve produced albums called many different colors, from green to red, white, teal, and black.