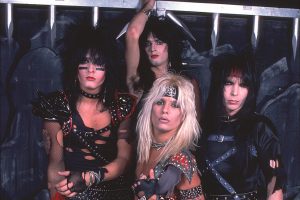 They have also achieved seven platinum or multi-platinum certifications, nine Top 10 albums on the Billboard 200 chart, including 1989’s Dr. Feelgood, which is Mötley Crüe’s only album to reach number one, twenty-two Top 40 mainstream rock hits, and six Top 20 pop singles.

Mötley Crüe | Looks That Kill (vocal and guitar only)