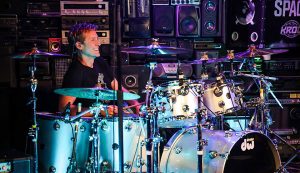 He’s played with top acts such as Devo, Guns and Roses, Paramore and Sting, Nine Inch Nails to name a few.

Because of the list of acts and artists he’s played with, he’s on over 400 records. I’m not sure that’s not a record in and of itself. Josh Freese is a busy guy. The number of genres’ he’s been successful in is also astounding.