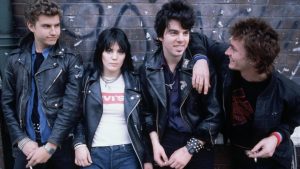 Joan Jett was born in 1958 as Joan Marie Larkin. She is an American Rock Goddess that is know for her pure rock and roll sounds with heavy distortion and a voice that’s just as raspy as her guitar sounds.

She was the founder of the band Joan Jett & the Blackhearts. But this was not her first act. She previously played with and was a co-founder of The Runaways, where she mixed it up with the likes of Lita Ford and other notables.

She never saw great success in the music industry unto she founded Joan Jett & the Blackhearts. Her previous solo career never took off and The Runaways never tasted of great success either.

It was their 1981 release of “I Love Rock and Roll” that catapulted them into their first real success.