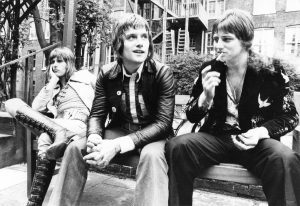 Emerson Lake and Palmer was an English supergroup formed by Keith Emerson and Greg Lake. Emerson was the guitarist, bassist, singer, and keyboardist, while Lake was the producer. They had several auditions for the drummer and percussion position in the group before they finally chose Carl Palmer, who was with Atomic Rooster at the time. Their first official gig was at Plymouth Guildhall in Plymouth, England in August of 1970.

Their eponymous debut album, Emerson Lake & Palmer, was recorded at Advision Studios. The album did well in the UK when it was released in November of 1970. In the United Kingdom, it reached #4 on the charts and United States, it reached #18.