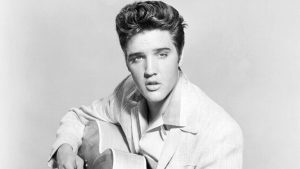 Elvis Presley is one of the most famous rock and roll singers of the 20th century and will forever be one of the most prominent pop culture icons of that century. His impact on music from the beginning of his career recording acetate records at Sun Records until his last album, Moody Blue in 1977, is something that will be talked about for centuries.

He was discovered at after recording session on January 5th, 1954 with Bill Black and Winfield “Scotty” Moore. Sam Phillips, the boss at Sun Records, started recording the three after they began playing “That’s All Right” by Arthur Crudup before they left for the night. Phillips overheard them from the control room and made them start over. Within a few days, it was played on the Red, Hot, and Blue show in Memphis, Tennessee by DJ Dewey Phillips (no relation to Sam Phillips). It didn’t take long for people to start calling to request the song and as a result, Presley, Moore, and Black recorded a cover of “Blue Moon of Kentucky” for side B of Presley’s first album. “That’s All Right” was on side A.

It wasn’t until 1956 that he made his first recordings under contract with RCA records and released his debut album Elvis Presley. The album contained 7 tracks recorded recently, along with 5 other recordings that were done with Sun Records. The first song on side one is the famous song “Blue Suede Shoes”.

He briefly paused his music career between 1958 and 1960 when he was drafted into the US Army in 1958. While the US Army offered to only have him perform concerts for troops and basically be used to recruit, Presley wanted to serve as a regular soldier instead. He ended his military career with the rank of sergeant.

Over the course of his career, he produced a total of 24 studio albums and 17 soundtrack albums.

In The Ghetto (vocals only)

Let Me Love Me Tender (vocals)