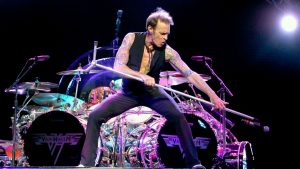 David Lee Roth got his start in music in his teenage years singing on his own and with a band called the Red Ball Jets. The band known as Mammoth sometimes rented the Red Ball Jets’ PA system and Roth ended up joining the band as the lead singer. That band later changed their name to Van Halen and after being with the band from 1972 to 1985, he separated from them. He re-united briefly with Van Halen in 1996, but didn’t fully return to the band until 2007.

He has had a solo career since 1985 and released his own solo album in 1986, Eat ’em and Smile. It was very successful and ended up at #4 on the Billboard Top 200 charts. Two years later, he released the album Skyscraper. He’s produced a total of 6 solo studio albums since with the most recent one being Diamond Dave in 2003.

Dance The Night Away (vocals guitar bass only) – Van Halen