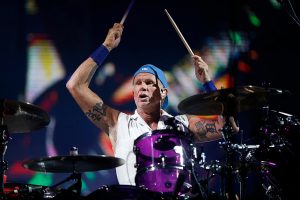 Chad Smith started playing drums at seven years old and continued into adolescence playing in high school bands with no formal training. From there he played in a band called Pharroh and Toby Redd. Then, in 1988, he found a home as a drummer for the Red Hot Chili Peppers, who he has played with ever since.

In 2007, he formed Chad Smith’s Bombastic Meatbats with Glenn Hughes, Jeff Kollman, and Ed Roth as a tribute to 1970’s fusion and funk music. Since 2007, they’ve recorded 2 studio albums and a double live disc.

Today, he also plays with a supergroup called Chickenfoot alongside legend Sammy Hagar, Joe Satriani, and Michael Anthony. They’ve only released 2 studio albums together as a band, as all members have other commitments and Smith has said that “everyone has different things going on”.