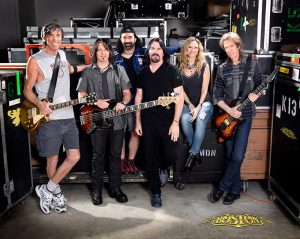 Boston was formed in, of all places, Boston, Massachusetts in 1975 by Tom Scholz, who is skilled at playing multiple different instruments from guitar, bass, keyboards and drums. The band is unique in that it has spanned 40 years and has only produced 6 studio albums the entire time, but is considered one of the best classic rock bands of all time. Their debut album, Boston, was one of the highest selling debut albums in US music history and has sold over 17 million copies.

Tom Scholz started the band in 1975 after graduating from the Massachusetts Institute of Technology (MIT) and used his salary from working for Polaroid to build his own recording studio in his basement. He also was able to finance demo tapes in professional studios. The demos for the classic songs “More Than A Feeling”, “Peace of Mind”, “Rock and Roll Band”, and “Something About You”, were produced in 1974 by Scholz, Jim Masdea, and Brad Delp. These songs all went on the band’s debut album, which was mostly recorded by Scholz in his home with the vocals of Brad Delp being added in afterward and the album itself was mixed by John Boylan in Los Angeles.

More Than A Feeling (Brad Delp vocals only, drums and bass only) – Boston