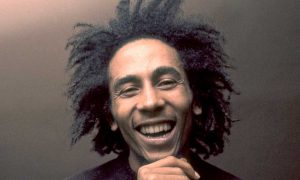 Bob Marley, born Robert Nesta Marley, was one of the most iconic black singer, songwriters, and musicians of all time. Born and raised in Jamaica, he got his start with performing at Federal Studios for Leslie Kong, a local music producer. One of his first singles, “One Cup of Coffee” was released under the name “Bobby Martell”, which he used as a pseudonym at the time. He was in a band known as the Teenagers in 1963, which changed their name a few times until finally settling on the Wailers. They were hired to open for the San Francisco band Sly and the Family Stone, but they were fired after the first four shows because they were more popular than the band that had hired them. In 1974, the Wailers broke up and Bob Marley pursued his solo career.

One Love (vocal only) – Bob Marley