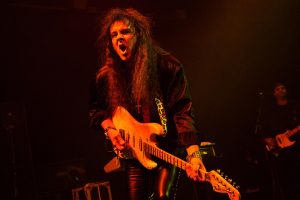 Yngwie Malmsteen, born as Lars Johan Yngve Lannerbäck on June 30th of 1963. He is a a Swedish guitarist, songwriter, composer who owns his own band.

He first came to the main stream in the 80’s, when big hair bands ruled. He fit right in with his heavy metal band that was saturated in a neoclassical metal styles that gave him a sound all his own.

He has a large cult following in may parts of the world and is still active to this day. He sports 20 album releases over his 40 year career to current.

That’s an amazing album every other year. We’re not done. This is the most underrated and mostly unknown guitarists on the planet. Time Magazine placed him at #7 in their top 10 list of the greatest electric guitar players of all time.