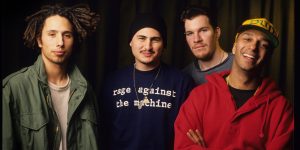 Rage Against the Machine was founded in 1991 as a rock band that hails from Southern California. The band is more political than most think and has a strong leaning to the anarchists movement.

As of 2010, the band had sole in excess of 16 million records for their heavy tones and rampant metal riffs.

It was 92 that took them to commercial stardom with their newly released album that was self titled “Rage Against the Machine”.

They’ve won many awards and still rock to this day after a few shot periods of darkness throughout their career.

Rage Against The Machine | Bulls On Parade (multitrack)