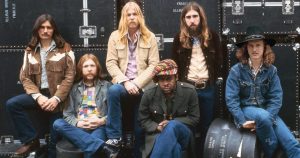 The Allman Brothers Band is a classic American rock band formed in 1969 by the brothers Duane and Gregg Allman in Jacksonville, Florida. The band would go on to attain seven gold and four platinum albums.

Instead of moving to New York City or Los Angeles, the band rented a cabin outside of Macon, Georgia for $165/mo to stay close to their roots in the South. They recorded most of Idlewild South there.